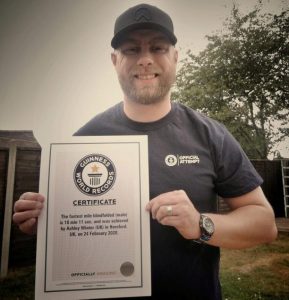 Many of our members will know of Ashley Winter from the talk he gave at the West Midlands branch meeting and his fund raising efforts for our cause. He was due to speak at our June conference which regrettably had to be postponed. Never one to sit back and take it easy, he has been active again and here is a report recently published on the Fight for Sight website.

Hereford man Ashley Winter has set the Guinness World Record for the fastest male blind-folded mile at 10’ 11”, in aid of Fight for Sight.

Ashley, who has the rare eye disease keratoconus, took on the challenge in February to raise money for eye research. After months of waiting for Guinness World Records to confirm the evidence, the 37-year-old received his official certificate last week.

Ashley is a welfare officer for the Defence Medical Welfare Service and served for 14 years. His eye condition means that the normally round dome-shaped clear window of the eye (cornea) progressively thins, causing a cone-like bulge to develop. This results in poor vision, and currently there is no cure.

The event was organised in the run up to Rare Disease Day on 29 February to raise money for vital eye research that could lead to the next breakthrough for sight loss conditions like keratoconus.

Ashley was diagnosed with keratoconus in 2010 but he is determined not to let his sight impairment get in the way of his passion for adventure and regularly takes part in challenge events to test his endurance levels and physical strength in the face of his condition.

Ashley said: “I’m delighted that my Guinness World Record attempt had been approved. By doing these challenges I want to prove to myself and to others with an eye condition what can be done if you put your mind to it. By raising money for Fight for Sight I hope to help find the next breakthrough in treating sight loss conditions like keratoconus.”

Director of Fundraising at Fight for Sight Ikram Dahman said: “A huge congratulations and well done to Ashley for his achievement of setting a Guinness World Record. Ashley is a fantastic ambassador for Fight for Sight and we are very grateful for all his work in fundraising and raising awareness for the charity. Eye research was already a hugely underfunded area and this has only been made worse during the Covid-19 pandemic, which is why the support of people like Ashely is more important than ever. We know that researchers are on the cusp of breakthroughs and we can’t let Covid-19 affect out long-term mission – to create a world everyone can see.”

Ashley is now listed on Guinness World Record’s website as the record holder for the fastest mile blindfolded (male). 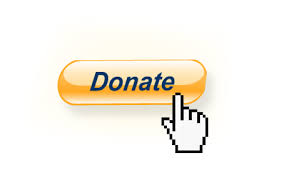